The Key West Maritime Historical Society is pleased to announce the donation of an early and important document to the Monroe County Archives in the History Room of the Monroe County Library in Key West. The document is an 1848 list of instructions for maintaining the Key West Lighthouse, written by the renowned lighthouse- keeper Barbara Mabrity. The lighthouse had just been completed, rebuilt after its predecessor had been destroyed by the great hurricane of 1846. Mabrity and her husband Michael arrived in Key West in 1826, after he had been appointed keeper of the island’s first lighthouse, built on its southwest corner. Michael died of yellow fever in 1832, and Barbara Mabrity took over as light-keeper. When the 1846 hurricane struck, Barbara was on duty. As the tower crumbled in the storm, she was able to escape with only one of her six children. The rest of her family perished. Despite the tragedy, Mabrity kept her position as Key West’s lighthouse-keeper, waiting to resume her duties while the replacement tower was built on Whitehead Street. Mabrity maintained her position until she retired in 1864 at the age of 82.

The Key West Maritime Historical Society, a not-for-profit, all-volunteer organization dedicated to the research and dissemination of information about the maritime heritage of the Florida Keys, acquired the document earlier this year through the generosity of an anonymous donor. The KWMHS’s directors decided that it was such a significant part of our island’s history that it deserved a permanent home in the County Archives. Anne Layton Rice, Monroe County Library Administrator, says of the gift, “The Library is delighted to add this amazing document to our archives, especially since so little is known about the life and work of Key West women during this time. We are especially grateful for the donation and look forward to digitizing and sharing it with the public via the Digital Public Library of America.” An important part of Key West history has now returned home, where it will remain for future generations. 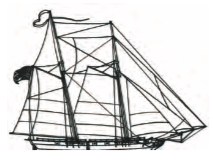 The Florida Keys Sea Heritage Journal is published quarterly. Subscription is available through membership. Copyright 2014 by the Key West Maritime Historical Society of the Florida Keys, Inc. The art on the masthead, the USS Shark, was drawn by Bill Muir.